Several years ago now, when I read The Calcium Lie, I found out that vitamin C and whole food vitamin C complex were not the same thing. I wasn’t surprised in the least because obviously this is surely the case for most supplements: an extract is not the whole food. But a few days ago, I saw a short video presentation that forced upon me the realisation that there is a huge functional difference between what is sold as vitamin C and the complex vitamin C molecule we find in whole foods. 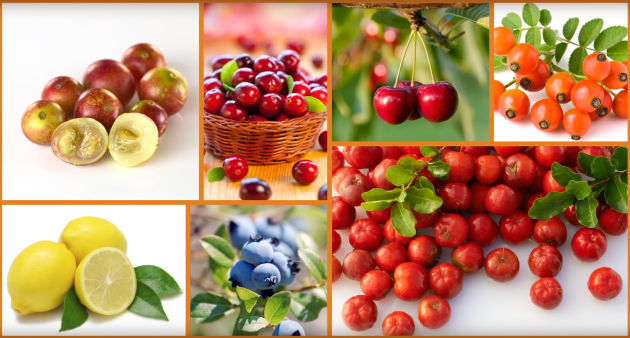 The distinction may seem trivial at first—it has on the whole clearly been missed—but it is rather important: ascorbic acid, that has been equated to and sold as vitamin C, is the substance from which is made the thin antioxidant shell that protects the many constituents of the vitamin C complex as it is found in food. Since ascorbic acid can be produced in a lab, whereas whole vitamin C complex can only be found and extracted from real food and therefore cannot, this is naturally what has been done: manufacture ascorbic acid and sell it as vitamin C.

This makes sense, of course, because none of the supplement manufacturers would be inclined to emphasise this point. It would be kind of like shooting themselves in the foot. But also because, given the proven biochemical and physiological value of antioxidants, it’s not a far stretch to convince oneself that the usefulness of vitamin C is, in fact, derived from the effects of the ascorbic acid shell. For this reason, when I read Dr Thompson’s comments on vitamin C, I made a point to pile on the red peppers, brocoli and lemons in our diet at home, but nonetheless kept on taking ascorbic acid supplements and do to this day. This is about to change.

Dr. Darren Schmidt is an American chiropractor who works at the Nutritional Healing Center of Ann Arbour and, as most chiropractors, practices natural medicine, treating thousands of patients each year, most of them suffering from the same kinds of complaints, aches, pains and disorders, as is the case everywhere else. The talk was about heart disease: number one killer in the US and very prominent in all industrialised countries. To make it as clear and simple as possible and get the message across, he described that heart disease arises from the gradual filling up of the coronary arteries supplying blood to the heart with arterial plaques that with time grow to block the way completely or almost, and that this leads to a heart attack. We covered this topic in detail in the article At the heart of heart disease.

The main point he wanted to get across is that plaques in the arteries and blood vessels develop because of an injury to the tissues lining the vessels, just like a scab does on the surface of the skin when we accidentally scratch, scrape or cut it, and that a well-functioning organism will fix that injury in the same way as it does the surface of the skin: the scab forms, the skin repairs itself underneath, and when it is healed, the scab falls off. Plaques are like scabs.

He explained that, fresh out of university in the early 90’s, he had heard at a conference someone speak of the work of a great pioneer in nutritional medicine of the first half of the twentieth century, Dr Royal Lee, a friend and colleague of the other great pioneer Dr Weston Price. Dr Lee was the man who made the first food supplement, and the first concentrated whole food vitamin C supplement. He founded in 1929 the Vitamin Products Company, which later became Standard Process, Inc. Lee taught that this concentrated food in tablet form was like a pipe cleaner for arteries. Hearing this, the young chiropractor thought to himself, if it worked then it should work now, and he began to prescribe vitamin C to all his heart disease patients. For a decade he prescribed vitamin C, and for a decade he failed to see significant improvements or any sign of reversal of atherosclerosis in his heart disease patients. But he had missed something.

Frustrated and disappointed, he looked again at the original research and writings of Drs Lee and Price about nutrition and disease, and in particular about vitamin C, and began prescribing only Standard Process vitamin C. What he found, invariably, was a quick improvement in his patients whose chest pains and complains would disappear, and who would gradually feel better and better. Since then, he has repeated this on thousands of people with such success that he now teaches, he now repeats what Dr Royal Lee taught almost a century ago, that the cure for heart disease, for disease of the arteries and atherosclerosis, is vitamin C. And that vitamin C is not ascorbic acid, but it is whole food vitamin C complex.

Schmidt is not handsome nor charismatic. He does not speak eloquently. He is far from refined in his choice of words and speaking style. He doesn’t come across as a brilliant doctor or scientist, and not even as a bright guy, really. But the clinical experience and observations on which his statements and claims are based are undeniably impressive and clearly unambiguous in the information they convey: ascorbic acid has no effect on healing injured tissues and in allowing for the body to clean up and remove the plaques from the arteries and blood vessels; whole food vitamin C complex does, and it does so remarkably well and efficiently in everyone who takes it.

The implication is that other than providing antioxidant effects, ascorbic acid is useless for aiding and promoting healing of tissues. In this case, the concern is the health of the arteries, but it’s not a far stretch to conclude that this applies to all injured tissues in general. What is needed is whole food complex vitamin C, which we eat in whole foods or take in supplements that are made from whole foods. Therefore, it’s a no brainer: if you are interested in keeping your arteries clean and your heart and brain healthy and well-functioning for as long as possible, take a whole food vitamin C complex supplement, and pile on the vitamin C rich foods in your diet (superfoods highest in vitamin C include Camu Camu, Acerola and Goji ; regular foods highest in C include bell peppers, broccoli, brussels sprouts, strawberries and kiwi).

There is one last crucial point to this story, and I was happily surprised to hear it mentioned during the presentation. It is something that is explained by Gary Taubes in Good Calories, Bad Calories, but that is very rarely heard or mentioned anywhere. Vitamin C enters cells through the same channel as sugar does. But for evolutionary reasons, glucose always takes precedence over it (and all other nutrients). Therefore, as long as there is sugar to be shuttled into the cell, vitamin C stays out and waits: it does not enter the cell. So, what does he suggest for the diet? Can you guess? No sugars (simple carbohydrates), no starches (starchy carbohydrates) because they become sugars, lots of fat, adequate protein from healthy animal sources, and lots of green veggies, Sounds familiar? And, of course, whole food vitamin C concentrated in supplement form.

Finally, I promise to write about these and other great pioneers of nutritional medicine. I feel that these people who were greatly ahead of their times and usually greatly suffered from it deserve more recognition than they get. They deserve more recognition than they ever will get. But still, I would like to do my part. I don’t know when, but I will.

17 thoughts on “Vitamin C is not vitamin C”

#
Who’s joining us for dinner tonight?
Do you know how many people die of cancer each year? It’s about 10 million people. And that’s about 800 000 per month, 200 000 per week, and 27 000 per day.
Did you know that CVD is the number one cause of death worldwide? Do you know how many people die of CVD every year? Well, as you can see from this WHO postcard, it’s 18 million.
Rejuvenatingly green. The juice is made with celery, cucumber, spinach, fennel bulb, ginger, lime, and mint. It is then diluted by half with water, or for a special treat, with coconut water instead. The result is a wonderfully fresh, delicious, and nutrient dense drink full of micronutrients: vitamins, minerals, antioxidants, , enzymes, and all the phytonutrients concentrated here, those we know and those we don’t know.
A highly cleansing celery salad with all its leaves topped with extra virgin organic arbequina olive oil, plenty of unrefined sea salt, roasted sesame seeds, and the last few pieces of dried wild game meat given to me by from my Finnish friend Lauri.