A couple of months ago, I had just gotten to the locker room at the gym, when a buddy of mine came in. Changing into his workout clothes, looking at himself in the mirror with his shirt off, he said he was tired of this layer of fat over his abs, that he just couldn’t get rid of it no matter how much he tried. He’s a handsome Columbian guy in his mid thirties, super nice, friendly, and easy going, big open smile with nice white teeth. He’s well built, strong, with balanced musculature but … there’s not much definition.

Everyone wants to be cut, of course, and when you’re working out 5 or 6 times a week, like he does, and you can’t get cut, you get frustrated by that. Quite understandable. Meanwhile, I work out typically three times, and I’m “rallado” as he says to me. In english, the term is shredded: so lean that under tension, we see the muscles fibres. In my case, we can see them in every muscle, including the abs. He knew that, obviously, since I’ve been like this ever since we first met a year and a half ago. The only thing that’s changed is that I’ve put on some muscle and use heavier weights in my workouts.

And so, naturally, that was my queue:

– You just need to cut the carbs. The fat is going to melt off on its own in no time. Especially if you are working out the way you do. Just stick to meat and vegetables. Make it simple for yourself. Have eggs and avocados for breakfast, and meat and veggies the rest of the time. If you can skip breakfast, that’s even better: you’ll give your body a longer time to burn fat.

After our workout, we said goodbye, and he told me he was going to Columbia for a while for his work (he’s part of a several-generation, several-family-member meat business based there, but lives here in Madrid with his wife and young child). He said that even though they always serve so rice, pasta, and potatoes with every meal, he would do his best to stick to the plan of having only meat and veggies. I gave him a good handshake, told him he could do it, and that it was important to be strict for the first month to allow for a good transition to fat-burning.

A few weeks later, he came back. We bumped into each other at the gym again. I was doing chest and back, he had come to do shoulders. He looked noticeably different: his face was smaller, his features more defined, his neck was thinner and more visible, his eyes were whiter and his skin was smoother. He looked 5 years younger! As soon as I saw him, I told him he looked very good, thinner in the face and neck, younger, and clearly healthier. He was happy to hear me say it, of course. He said that many people had told him that he looked younger, and obviously, he could also see it himself when he looked in the mirror. But it’s always nice when someone tells us we look good; it doesn’t happen very often. He had already lost 4 kg.

We saw each other a few more times at the gym like that, working out, but it took a while before he told me that he was feeling weak, that he couldn’t push as much weight as before, that he was often tired, and strangely, often in an angry mood. Naturally, he thought it was because he wasn’t eating carbs. That somehow he was carb-deficient.

– Do you add plenty of salt and fat with your meals meat and veggies?

– That’s the problem. You need to start right away. Lots of salt, and lots of fat with your food, whenever you eat.

– Unrefined sea salt, organic butter and coconut oil, and olive oil with salads. With every meal. When you go low carb, you not only get rid of accumulated water in your tissues due to the chronic inflammation triggered by carbohydrate exposure (that’s why your face and neck thin out in the first week or two), but you also excrete more salt in the urine. It’s crucial to eat plenty of unrefined salt every day. 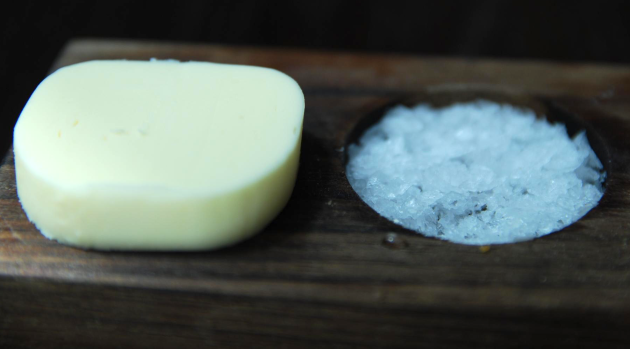 Two days later, when I got to the gym, he was already into his workout, and he was pushing heavy weights on the benchpress, he was walking around with a spring in his step, and he was smiling. I didn’t even need to ask, but I did anyway:

– So, how are things going? Lots of salt and fat?

– Yes! And I feel great! I feel strong, I feel powerful, I’m not tired, and I’m not angry anymore.

– Fantastic! Glad to hear that. And from now on, you’ll always feel like this. No ups and downs, no weakness or lack of energy, no hunger pangs, no mood swings.

Each time we saw each other at the gym in the next weeks, I could tell he was getting more defined. The last time we met, he was again walking around feeling strong and working heavy weights with a smile on his face, and he looked ripped, a lot more defined. And he knew it too. I could tell by the self-confidence.

When we parted, I told him he looked good, that he looked more defined, and more energetic. He was happy: “Thanks a lot for all your advice. It’s really made a huge difference. I feel great, and my abs are starting to show!”

And so, we have to repeat this, and repeat it over and over again. Eventually, it sinks in. Especially when we feel the difference it makes. Just like it happened in this case with my Columbian buddy at the gym. So, what’s the moral of the story?

You want to feel strong, and energetic? You want to look healthy and young? You want to get ripped with tight 6-pack abs? The formula is simple:

3 thoughts on “Eat your salt, and eat your fat”