Two, roughly speaking, the body is generally either storing surpluses or using reserves.

Three, the major fuels for the body are glucose and fatty acids.

Four, for the body to use fat reserves, insulin levels must be low. Fat cannot be efficiently utilized as long as insulin is high, because insulin promotes storage.

Five, the thyroid gland regulates metabolism and brain function. It requires adequate amounts of iodine without which it cannot work properly. To ensure healthy metabolic function, iodine supplementation is critical.

That’s what you need to know. If you want more details, I can expand a bit.

Every second that we are alive, trillions of biochemical reactions take place. The energy currency is adenosine triphosphate, ATP. Mitochondria produce ATP primarily using glucose or fatty acids. Fatty acids produces a lot more, but glucose is much easier to use. Both are used but one always dominates. In general, if there is glucose to be used, fatty acids are not much. For fat loss, we want to promote fat burning for ATP production to fuel cellular activity.

High glucose levels from carbohydrate intake trigger insulin secretion. This is necessary to bring the glucose into the cell, and to get rid of it from the bloodstream where it causes damage to the tissues by glycation. Within the cell, glucose can be either fermented without oxygen or oxidised with oxygen. Lower oxygen levels (and very high short term metabolic needs) promote fermentation. Higher oxygen levels (and lower metabolic ATP production rates) favour oxidation. More fermentation leads to greater accumulation of lactic acid, which further decreases oxygen levels. Red blood cells do not have mitochondria and therefore can only produce ATP by fermenting glucose.

Lower glucose leads to lower insulin. This triggers the release of fatty acids and glycogen into the bloodstream. If sustained, low glucose leads to the production in the liver of ketones primarily to fuel the brain whose cells can either use glucose, ketones, or medium chain fatty acids because longer molecules cannot pass the blood-brain barrier. 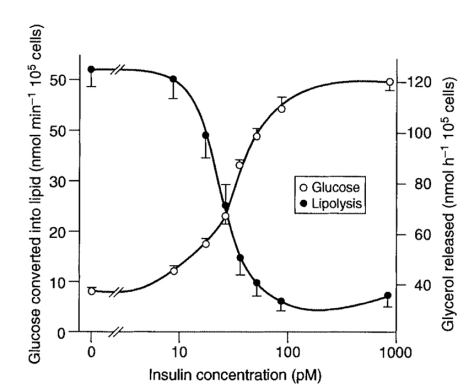 Amount of glucose stored as fat and amount of fat released from fat cells as a function of insulin concentration. Plot taken from https://optimisingnutrition.com

But no matter what your personal threshold happens to be, it will always be the case that the lower the intake of carbohydrates, the lower the glucose and insulin will be, and the more efficiently your body will burn fat as fuel.

Pushing this to the limit—maximal usage of fat stores—we would provide the protein necessary to maintain muscle and other active tissues and nothing more. In this situation, basically all energy needs would be supplied by stored fat reserves and glycogen when needed. This is greatly enhanced by resistance training.

Fat burning and protein synthesis can be further optimised by intermittent fasting. Extending the time between feedings allows glucose and insulin to drop lower, which increases the rate of fat burning. And by eating fewer but larger amounts of protein in a meal is better because protein synthesis increases in proportion to the amount consumed.

Thyroid function regulates metabolism. Iodine is used in every cell, but in the thyroid, it is concentrated to more than 100 times the average of other tissues, because iodine is the main structural component of thyroid hormones. Iodine supplementation is critical because most soils are highly depleted. It is water soluble and very safe to supplement with.

5 thoughts on “Want to lose weight? Here’s what you need to know in under 1000 words”